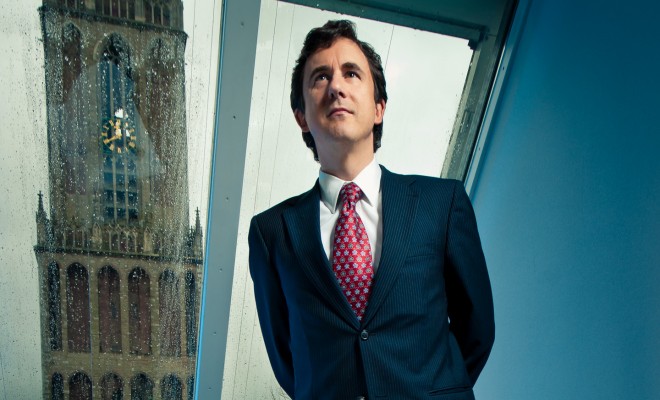 In part two I’ll take you through the shot I did with Arnoud Snepvangers, CEO of Eaglet Eye, an eye surface profiler (!?!) mainly used by the contact lens industry and opticians. During our first telephone conversation he proposed we should do the shoot at an optician, and a few days later he replied he found a partner optician in the centre downtown of Utrecht who was willing to let us do the shoot at his facilities.  On location we had basically two options: shoot downstairs in the actual store with a rack full of spectacles as background, however, upstairs was a lobby/waiting room with a large window with a (close up) view on the Dom of Utrecht. As I like to involve the client we talked it through and Arnoud was very much taken with the idea of shooting with the Dom in the background.

The challenge in this shoot was first to balance the ambient light outside with flash light. As it was a cloudy, rainy and hence relative darkish day  I had plenty of latitude f-stop wise. No problems there with overpowering the sun and what more. The second challenge was more difficult: controlling the reflection in the window as much as possible as I was using a three light set up in this one, which in the end did not work 100%. There is a slight reflection to be seen which I was able to tone down in post-processing.  Again I was lighting the background or rather the right white wall with a blue gelled flash in order to have some what continuity  in this series. This back light was camera left pointing towards Arnoud aiming slightly at his back and at the wall to get an even as possible blue toning of the white wall. The key/main light was camera right high on a boom in a half opened umbrella above Arnoud’s head aiming almost straight down but with a slight angle towards his face. Using a low power setting I had a nice light fall-off as I find feet far less interesting in a portrait. I did use some gaffer tape and some cloth to flag some spill light causing harsh reflections in the window. The device, however, was rather to dark in this way, something that could have been fixed in post -processing. But as the opportunity, time and patience of Arnoud were all available, I installed a third light in a 40cm by 40cm softbox camera and device left, just outside the frame. Again using a low power setting not to overpower the blue gelled light on the white wall opposite. Also this light I aimed not at the device but I feathered the light hence creating a less spcular, more soft, almost glowing light on the device and less spill on the white background keeping it blueish. By using the shutter-speed I could control the ambient light towards a point the that the Dom in background would be relative darkish making Arnoud and the device really pop out. 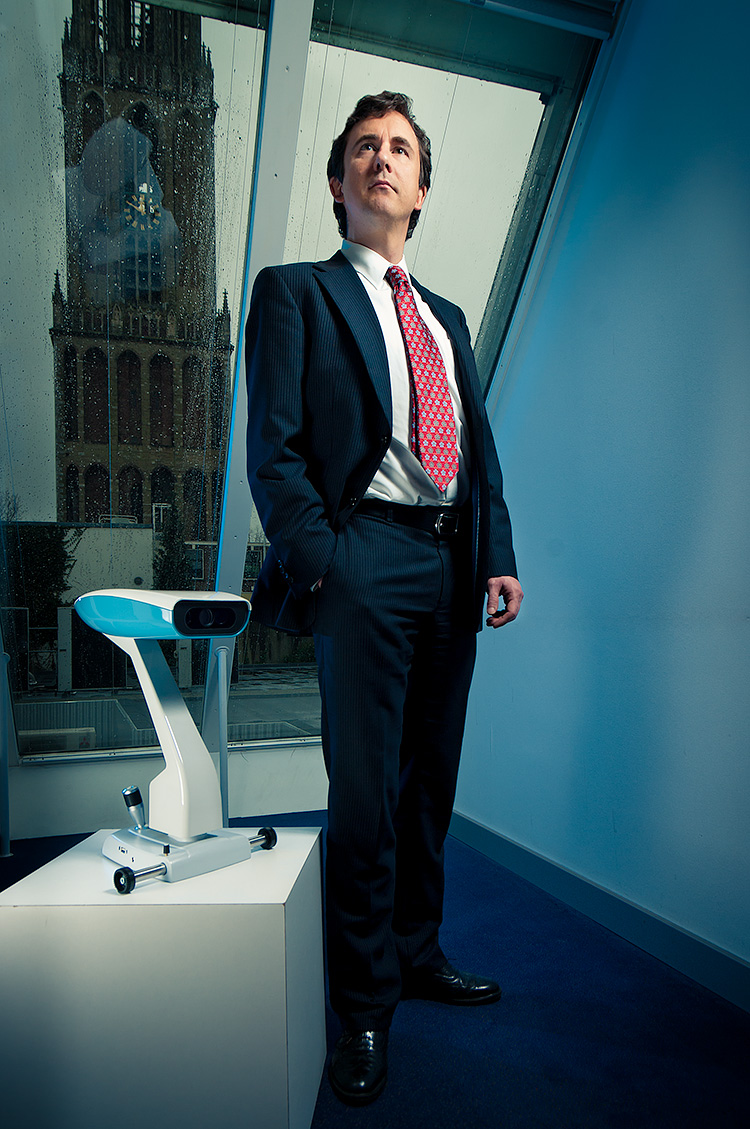